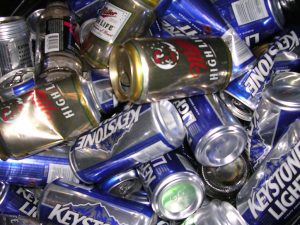 Have you noticed your go-to beer or soft drink is hard to come by or completely unavailable?  It may not be coincidence; as the COVID19 pandemic continues to rage across the United States, shortages of a multitude of supplies have occurred.  Everyone remembers the toilet paper panic of March and April, the lack of available Personal Protective Equipment (PPE), the beef shortage at fast food restaurants like Wendy’s, and the general uneasiness these shortages and others like them gave us.  However, July has seen the rise of new shortages, most notably: aluminum cans.

You may have seen articles online or news segments that are discussing other prominent July shortages due to COVID19, such as coins or lumber; however, aluminum cans may make the greatest impact on the average American.  As COVID19 impacts rose, many Americans sought to bulk up on goods stored in their homes.  In doing so, consumption of products, including beers and sodas, shifted away from bars, restaurants, and convenience stores, which rarely utilize aluminum cans, and moved towards multi-pack products often purchased for domestic consumption.  These bulk-based products frequently feature aluminum-canned items.

This newfound demand for aluminum cans is pinching supplies for some drinks, and creating a significant disparity between supply and demand.  This disparity has sent the can industry into a tizzy, as manufacturers have already announced plans to build three new manufacturing plants in the next 18 months. Ball Corporation, a popular North American can maker, has also pledged to open two new manufacturing plants in the United States and add two additional production lines to already existing factories.  The corporation had seen an uptick in can demand from specialty drinks like hard seltzers and sparkling waters.  They also noted that the environmental upside of cans, combined with the rise in popularity of newly canned drinks and COVID19 impacts, has created “unprecedented demand and short supplies” of their coveted aluminum product.