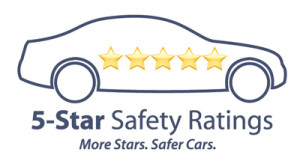 US Department of Transportation has proposed changed to its 5 Star Crash Safety Rating system.

U.S. regulators have proposed an updated version of the five-star crash-test rating systems that will incorporate new technology and test dummies. The five-star crash-test ratings has been in place by The National Highway Traffic Safety Administration since the late seventies and although they have proven themselves highly credible among both car dealers and buyers, this update seeks to even further improve safety.

Some changes to the rating system include testing collisions that happen in the front at an angle in the hopes of decreasing pedestrian accidents, as well as adding half-star rating options so as to more closely gauge the accuracy of the rating. Dummies will also be updated to more truthfully simulate the human body, with bendable spines and necks. The NHTSA does not want to make things more complicated, but rather, more safe.

Safety can never be taken too seriously, especially when it comes to the road.

U.S. highway deaths increased by 8.1% throughout the first half of 2015, thanks to lower gas prices that made drivers want to get out on the road more frequently. The angled frontal collision tests as proposed by the new regulations would test for some of the deadliest motor vehicle accidents possible. Finding ways to prevent these fatal situations is pressing now more than ever.

The changes to the testing system are not expected to be put into action until 2019, according to NHTSA administrator Mark Rosekind. He also stated that cars on the road currently with a five-star rating would probably score more like a three and a half on the tougher proposed rating system. All these proposed changes are for the benefit and safety of every car owner in the country.