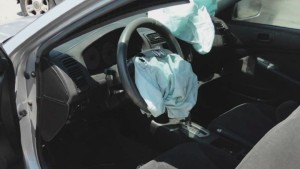 More than 390,000 Ford Ranger pickup trucks are being recalled due to overly strong driver’s side air bags.

The airbags in the recalled 2004-2006 vehicles have been found to cause injury upon release. The faulty airbags played a role in the death of 52-year-old Joel Knight, a South Carolina native whose truck crashed and caused deadly shrapnel to penetrate his neck.

In addition to Knight’s accident, the airbags are responsible for nine other deaths and more than 100 injuries. Many of the airbags have also simply failed lab tests as well.

The airbags were manufactured by Japanese company Takata, who will continue to see more vehicles equipped with their product recalled as time progresses. The estimated recall count is up to 24 million vehicles in the United States and The National Highway Traffic Safety Administration predicts that number will only grow.

CNBC reported that Ford spokesman John Cangany stated truck owners will begin receiving letters about the recall beginning Feb. 22 and that improved airbags are being made as soon as possible.

To find out if your Ford Truck is part of the recall, visit here and enter your VIN number into their system.